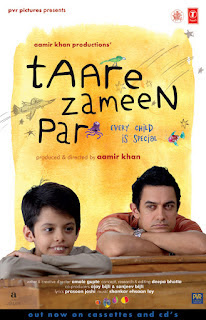 2 days back I watched TZP. I must admit, it’s after a long long time that a movie made me cry. After all the gyaan regarding video-production in DCS, I started looking at cinema from a very cynical point of view. So everytime I watched a movie, I would scrutinize it to the core and comment on it left right and centre. The result, I would never enjoy the movie. And this left me cinematically malnourished. Thankfully, this movie came forth as a saviour.

The subject itself is so strong that you happily overlook the minor flaws here and there. It’s a simple story beautifully captured and complete with brilliant performances. There is an instant connect with the character of Ishaan (Darsheel) – the dyslexic child burdened with the expectations of his parents and teachers alike. At some point in time, everyone has been misunderstood in his/her childhood. And this story is just about that – the vulnerable state of a child when people dearest to him are not ready to understand his state.

Where did we ever get the crazy idea that in order to make children do better, first we have to make them feel worse? Aamir Khan’s role as the art teacher Nikumbh compels us to reflect on parent’s behaviour towards children who are forced to join the rat-race; parents who are not ready to understand that ‘every child is special.’ His concern for Ishaan looks genuine, his fear for Ishaan’s future wants us to get up and help him too. The unspoken words between Nikumbh and Ishaan; the depressed look on Ishaan’s face; Nikumbh’s moist eyes – there are so many instances where you feel a gulp in your throat.

Add to it Prasoon Joshi’s beautiful lyrics; Shankar-Ehsaan-Loy’s unfailing music; lovely animations that take us into Ishaan’s mind; some unusually great performances by many debutants and the documentary shots of children shown during the credits. The year couldn’t have ended better!

CNN-IBN: Taare Zameen Par, directed by Aamir Khan and written by Amole Gupte, is the one film you have to watch, even if you haven't watched anything else this year because it's a film with a big heart, an important message, but mostly because it's a film that could change your life.
Posted by bhumika at 11:01 PM

:) Every single girl (and quite a few guys) I know and has seen TZP has cried.

Somehow instead of making me curious about the movie, its making me cringe.

Don’t worry, it has a cathartic effect. So you’ll feel good after you’ve cried (if you do!) :P

hmm... even I know of everyone seeing this movie and crying :)

i can vouch for the fact that Aamir is brilliant director and an even brilliant actor. but he has not been able to characterise himself as nikumbh completely. not in a manner, which would compel me to come of the theatre and call him nikumbh and not aamir. like i call him inu and not darsheel.

yes, do watch it!

interesting...and now I’m wondering where exactly did aamir go wrong. Like you rightly said on ur blog, some other actor could also have played aamir’s role...

Nonetheless, he did a very good job...

its a lovely movie whatever said and unlike what many other directors have ever managed to give us.

as lilone says - any other actor could have played the role - i'd like to who she thinks could have portrayed it so nicely. Not SRK please - imo, he just cant act!!
Plus, TZP without Aamir I wonder if it would have had the same result. Getting the cam capture what it has managed to do around Darsheel - I still try to remember which other director ever did that so nicely around a child.

hi prasoon, i too cannot imagine somebody else doing the role of aamir. I blv he should have taken some more effort to mould himself into the character of Nikumbh. I mean, you cannot talk about Nikumbh the way you talk about Munna (Rangeela), Bhuvan (Lagaan) or Aakash (DCH). Here, the actor overshadowed the character. I guess Darsheel is his new competitor :)

thanks for visiting my blog...hope to see you around

no no one mainstream....i dont think i really "know" who could have replaced aamir. but i know that he wasnt completely nikumbh. he was still, at the end of the movie, aamir.

i really ve no idea who could have portrayed the role better.

i agree with prasoon wen he says that TZP without aamir wouldnt ve been wat it is. perhaps, thats the only reason i think it makes it all the more acceptable, him in that role. because somehow more than the actor, the creative director is behind the success of the movie. therefore, i think, aamir has outperformed himself as a director than what he could ever give as an actor.