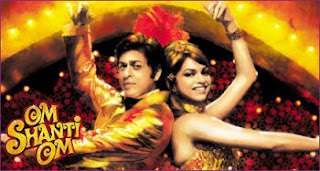 Well, there are three types of cinema goers:

Well, OSO – arguably the biggest film of 2007 – is a treat for everyone. I must confess at the very beginning of this post that by no means am I an SRK fan. However, he is the plastic beauty (tweaking the phrase) from Bollywood that can mould himself into characters from a fun loving college student in most of his movies to the legendary Ashoka to the socially responsible NRI in Swades. So whether you like him or not, he’s definitely worth a watch for the sheer fact that he is the King of Bollywood.

Spoofs have always been a favourite with the Indian audience. And when an entire movie rests on Bollywood’s attempt to laugh at itself (including SRK), it is sure to catch many eyeballs. Farah Khan leaves no stone unturned and gives the audience just what they love the most – a riot of film stars, larger-than-life sets, good music, hot babes and babas (how can you forget the six packs?!) and the eternal happy ending.

The film churns out a potpourri of tried and tested success formulae, carefully handpicked from many films. Like any super-duper hit movie, OSO has everything – emotions, drama (way too much), suspense, horror (oh yes!) and action. And all of this spiced up with a dash of nostalgia – the 70’s look. Especially the song, ‘Main Agar Kahoon’ is a visual treat - the blue-tinted night, the moving scenery against the car, the full moon rising in the background forming lovely silhouettes…Farah almost romanticizes the bygone era and leaves you wanting for more. But then comes the kahani mein twist. The hero must die to come back in another era with more drama. And this is achieved by not attributing any hero-like qualities to the character. So unlike the matrix stunts of Main Hoon Na, you have Om, the superman doing ‘Udibaba’!

As for the performances, SRK doesn’t have to try too hard to fit into the 70’S melodramatic role – overacting comes naturally to him. Deepika looks ravishing and Shreyas is adorable. As for Kiron Kher – she could have replaced Madhubala in Mughal-E-Azam ;). Towards the end, the real heroes of the movie – all the crew members - are honoured on the red carpet in patent Farah style.

Overall, OSO is to be seen not so much for the stardom but for the sheer amount of hard work that has gone into making a visually appealing film.
Posted by bhumika at 11:30 PM