I still remember the day I watched my mother as she carefully took out a shiny steel box from the cabinet of the kitchen. An aromatic burst engulfed the steamy kitchen as she opened its lid. Inside were some six mini containers, holding spices which had very unusual shapes. My little eyes shone as if I had discovered a treasure I never knew existed in my very house. She called it ‘aakha’ (whole) garam masala. But for a 5 year old girl, it was nothing short of magic. 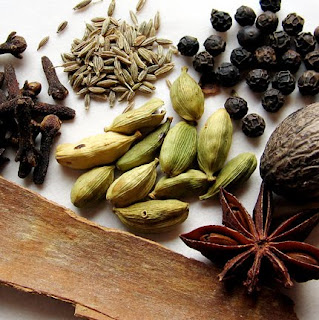 Over the years, not much has changed. I still stand in awe when I see the simplest of ingredients being transmuted into bold, hedonistic blends of the perfect flavour. Undoubtedly, Indian kitchens still remain the Holy Grail of gastronomy – churning out dishes that make for exalting culinary experiences. And it is not merely about the food, but about a whole culture that surrounds it.

But interesting, in India we don’t really follow measurements. Here, ingredients are measured out by practiced ‘instruments’ – by hand. Indian cooking is not like preparing cakes where you can say, “add 2 tsp. of sugar”. Instead, it’s a more liberating practice where you follow the dynamics of ‘andaazan’. And after having cooked quite some meals, I defer from believing that ‘andaazan’ would simply mean ‘approximately’. It’s more than just that. It’s about having the freedom to experiment and add a bit of what you think would possibly make the dish taste more delicious.

At the same time, unlike western culinary quickies, traditional Indian cooking involves great patience. It’s about letting the curries simmer on a low flame; of grinding the spices leisurely, allowing the aromatic flavours to ooze; of churning the sheera at regular intervals for hours together until it attains that perfect golden allure…Definitely, it’s more than just patience at work; it’s passion.

And the love affair with food doesn’t end there. There’s always the dollop of ghee to top it all or the generous helping of ‘gud’ in the thali. In other words, it is an unadulterated vision of life as a pleasure-seeking activity, where the need to provide our bodies with the nutrients alongwith an unabashed portion of fat is really okay.

Having cooked for a substantial number of years now, I would like to believe that I have only begun to unravel the mysteries that make any food well worth its salt. A friend once said, “Never cook when you’re angry; the food wouldn’t taste good.” Food, then, is as much about the ingredients as about the ‘jazbaat’ of the person who prepares it. The pangs of the hostel-fed stomach, when it thinks of ‘ma ke haath ka khaana’, is certainly no exaggeration in that respect.

Surely, cooking isn’t as easy as our mothers make it out to be. Like all great arts, it is something that requires dedication, passion and the ability to pick up those nuances that help create a masterpiece. It is a complex concoction of traditional methods, culinary secrets, social respectability, gratification and ofcourse a heady dose of love. In the words of Linda Henley, “If God had intended us to follow recipes, he wouldn't have given us grandmothers.”
Posted by bhumika at 5:45 AM

:) sorry for that. Promise to prepare a super meal for you the next time we meet :)

Glad you liked it. Thanks!

Food is the soul curry.!

you said it! thanks!